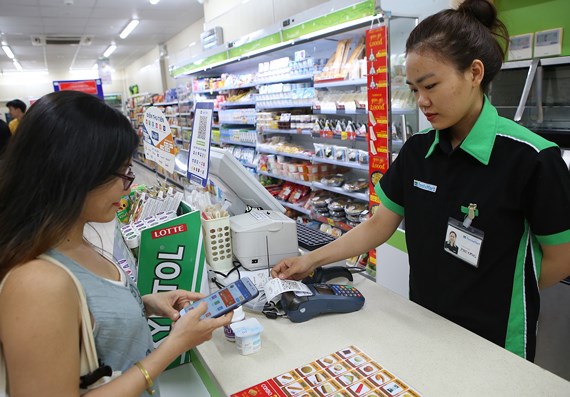 In February, Payoo and FamilyMart collaborated to give customers the option to experience QR code payment at 149 FamilyMart stores in Ho Chi Minh City. Through Payoo's POS terminal, the cashier at FamilyMart can create QR code for each customer's order. Customers then scan the QR code and pay by using Payoo mobile app or banking app.‍

Before launching the Payoo QR code payment, customers had to either pay by cash or by debit/credit card. This process takes time as it needs to verify customer’s name, phone number, signature, PIN and more. Now, customers can enjoy a faster and simpler checkout process by just scanning the QR code via their mobile apps.‍

Cam Ly (Binh Thanh district, HCMC) said, “It is so convenient to use QR code in stores, because payment via QR code is easier than the other payment methods. For example, with payment via QR code, I never need to worry about how much cash I have on me or if the change is correct,” Another customer Nguyen An said, “Young people like us prefer to use convenient and quick services, so I think applying QR code in FamilyMart convenience stores is a good choice.”‍

According to Mr. Ngo Trung Linh – General Director of VietUnion, QR code has been highly appreciated due to the payment method being convenient, safe, and fast. With 70% of the Vietnam population owning smartphones and young people are quick to adapt to new technology trends, he believes that QR code payment will soon become the new craze.‍

“FamilyMart accepted cash and card for a long time, however this is the first time they applied QR code payment method in Vietnam market. It’s our honour to cooperate with Payoo to increase convenience for customers and improve user experience through QR code payment at FamilyMart stores.” FamilyMart’s Vietnam General Director Mr. Asakawa Tatsuhiko shared.